#De-FAP or de-CAT, what happens when you remove them? 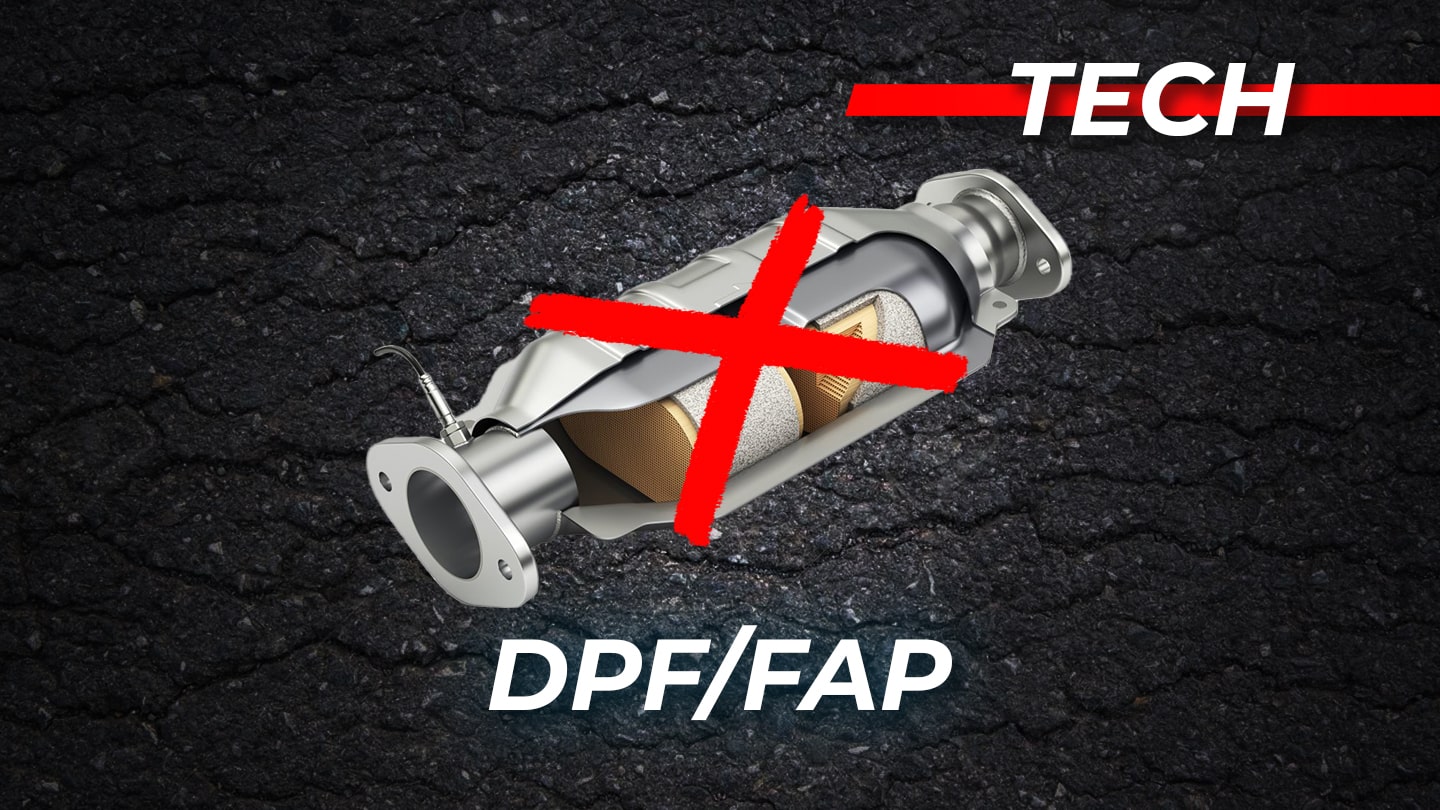 De-fap, de-cat, exhaust backpressure, and loss of torque at low rpm. Why?

A thorny topic today, and it is one of those topics that our readers requested: who was it that forced us to talk about this aspect? Raise your hand! Of course, we are joking, and as always, we will try to shed light on interesting topics, such as this one. Essentially we were asked what exhaust backpressure is and what it is used for. This is because some of you have tried to remove the catalytic converter, or the particulate filter, or even both devices on your car but with strange results.

The engine seems to have "emptied out" at the bottom end (loss of torque at lower rpm) while gaining in high-rpm stretch (more maximum power or at least more speed in revving up). In practice, there is often a gain at the top of the rev counter but at the expense of the engine's elasticity and thrust at lower revs. This can happen by removing the catalytic converter and any other element of the exhaust system (center muffler, for example) on a naturally aspirated gasoline engine, but even on turbocharged engines (whether diesel or Otto cycle,) there can be a similar phenomenon.

This is a very complex topic: it concerns the fluid dynamics flowing through a complicated system in that the real dynamics begin at the intake manifolds and then flow (with a lot of transformation due to the active combustion phase) into the cylinder, through the exhaust valve duct (2 in multi-valve engines) then into the outlet manifold. Just as the intake manifolds greatly affect fluid dynamics, the exhaust manifolds also impact the flow of gases in the duct.

First of all, there is no one type of manifold. If we are talking about a 4-cylinder, it could be a 4-1 type or the more complex 4-2-1 type. They can have different shapes, lengths, and diameters, meaning they can behave in many different ways. If we are talking about turbodiesel engines, things are somewhat simplified by the fact that the diesel engine has a narrower operating range, say from 1000 rpm to 4500 rpm (some diesel engines can run at higher rpm but not by much). The gasoline engine, even the simplest and quietest, has a range of use from 1000 rpm to 6000/6500 rpm. For this reason, the impact of removing certain elements on the exhaust system of a turbodiesel engine is (usually) a tad less than on a gasoline engine.

As mentioned earlier, there are simple exhaust manifolds where all manifolds are connected to a single duct and more complex manifolds. In engines that were less well designed in this respect, there is a tendency to use manifolds where all the outlets of the different cylinders flow into a single duct. Engines with better performance may have 4-2-1 manifolds, which means that the 4 outlets of the engine head split into 2 pairs. Each pair ends up in a conduit that only joins the second conduit to a single pipe after some distance. This solution, which is more complex and expensive, allows less interference between the exhaust gas pulsations coming from the 4 cylinders (ignition order of a 4-cylinder is 1-3-4-2). In sportier engines and where sound is an important element, the ducts are designed with particular care to their shape, length, and diameter. An example? Look at the exhaust manifolds of a Ferrari V8 with a naturally aspirated engine.

The concept is similar for naturally aspirated engines, but in turbocharged gasoline engines, there is less space available to create long, intricately machined manifolds. Some simplified systems use a single duct that collects all 4 outlets from the engine head and routes them directly to the turbine coil. On sportier engines, however, an attempt is made to create 4 ducts of equal length (long enough) before sending them together to the turbine spigot. There are always split ducts on engines using Twin-Scroll turbines so that there are two pairs of manifolds that always travel separately to the turbo coil, which (in twin-scroll turbines) has two separate ducts to the turbine itself (dual coils with two different designs).

In almost all cases, there are simple ducts on turbodiesel engines that collect all 4 outlets and convey them to the turbo coil. This is because of the aforementioned range of use, which is shorter than turbo-petrol engines that can easily reach 6500-7000 rpm (much more in naturally aspirated versions).

Pulsations and waves within the collectors.

Here we come to the complex aspect. We have discussed what happens when you intervene on the engine exhaust, and we have seen how the various exhaust manifolds are usually designed. What we have not yet talked about are the reasons for these choices and the relationships between performance and fluid dynamics. If we talk about kitchen exhaust, things are much simpler and are related only to back pressure. We have a fan (a kind of weak compressor) and a pipe. The gas flow is constant, so in order to discharge kitchen fumes more easily, we should try to get a duct that has these characteristics:

In an internal combustion or Diesel engine, the flows are not constant, and one cannot only reason in terms of back pressure. To imagine what happens in a duct (which is not simple and depends on the design of the whole engine), we can think of the burst/combustion phase that occurs when the piston is in the TDC position. The sudden increase in pressure makes the piston descend towards the BDC (the only active phase of the engine), then it goes up again towards the TDC, and the exhaust valve opens, and the gases start to escape.

In this phase, there is a transition in which a pressure spike gradually rises as it travels up the exhaust manifold (then into the catalytic converter, FAP, muffler, and other exhaust elements). This is followed by a reverse (weaker) spike that creates a depression in the reverse direction of the gas path. This peak depression draws gases from the cylinder through the still-open exhaust valve favoring the flushing of the cylinder.

In addition, depending on the type of engine and tuning, there is a phase (called overlap) in which both the exhaust and intake valves are partially open. This condition causes the vacuum formed in the exhaust manifold to also partially draw in the incoming flow ( just air if it is a diesel engine or for direct gasoline injections), while Otto cycle engines with indirect injection a mixture of air and gasoline) increasing the torque of the engine.

Fluid dynamics are affected by the diameter of the duct, its shape, variations in cross-sectional area, and length. Exhaust manifolds (and also intake manifolds) with all the elements that lead to the tailpipe are always compromises. This is because the whole exhaust system suitable for an engine rotating at 1000 rpm is completely different from an exhaust system suitable for an engine rotating at 6000 rpm. The former engine would need relatively long and thin manifolds in the first section, while the latter engine would need shorter manifolds with the largest possible diameter. Every car mounts an exhaust system designed not to have excessive back pressure at high rpm without compromising performance too much at low rpm.

When one or more of these elements are removed, there is usually an advantage at mid to high RPM because of the improved fluid dynamics resulting from the smaller cross-sectional area changes and the lower exhaust gas obstruction. This derives precisely from the removal of elements that in some way slow the gas flow and thus create backpressure.

The removal of these elements, however, almost always also alters the tuning that exists in the combination of the aforementioned elements. In practice, what almost always happens is that the engine's power delivery improves at medium-high engine speeds because, at these speeds, the benefits of the lower backpressure outweigh the disadvantages of the reduced exploitation of the depression waves created in the exhaust system.

Conversely, at low engine speeds (where the amount of gas is far less), the benefits of the lower backpressure become irrelevant compared to the partial loss of exploitation of the vacuum waves created in the exhaust system. Here the engine loses torque since there is no support in drawing air or air/fuel from the intake manifolds by the exhaust system.

In turbocharged engines, the turbine partially breaks these pressure and vacuum waves and partially changes their dynamics, so it can make the system less sensitive to changes in the exhaust system. Even in turbocharged engines, removing the catalytic converter and/or any particulate filter can generate phenomena of torque loss at low rpm. To partially remedy this phenomenon, there are ducts designed to replace catalytic converters and DPFs that make it possible to reduce backpressure without sacrificing the exploitation of the resulting vacuum waves.

Emptying a catalytic converter or particulate filter can be advantageous because of its lower resistance to the passage of large volumes of gas. On the other hand, a hollow cylinder with a much larger diameter than the exhaust pipe (the cross-section of a CAT or DPF can be as much as ten times larger than the inlet and outlet pipes) breaks the inertial effect of the gas flow, which creates vacuum waves useful at lower engine speeds.

As mentioned, it is always a compromise: an exhaust system with a large cross-section and very short ports may be suitable for track use where the engine never works at low rpm. Under normal conditions, where it often drops to low RPMs, it is necessary to find a balance between delivery at low RPMs and good power at mid to high RPMs.

We hope that this difficult topic has been made more digestible for you through this technical article. As always, we invite you to come back and read us in the coming days and share this article with your friends. Until next time!

How to tune a diesel or petrol car >>> Read Now

How to increase the power and torque in the car? >>> Read Now