The Pedalbooster app is compatible with all Apple devices supporting Bluetooth 4.0 and running iOS 7.0 or higher.

The Pedalbooster app is compatible with all Android devices supporting Bluetooth 4.0 and running Android 4.4.2 (KitKat) or higher.
Due to different Android manufacturers' specifications, pairing between the Pedalbooster and the application is not currently possible in the following cases:

The CHIPBOX Connect app is compatible with all Apple devices supporting Bluetooth 4.0 and running iOS 7.0 or higher.

The CHIPBOX Connect app is compatible with all Android devices supporting Bluetooth 4.0 and running Android 4.4.2 (KitKat) or higher.
Due to different Android manufacturers' specifications, pairing between the CHIPBOX and the application is not currently possible in the following cases:

an intercooler is a mechanical device used in a turbocharged car, it is used to cool down air from the turbo to the air intake of the engine. Intercoolers are frequently used because they introduce significant advantages: by lowering the temperature of the air coming into the engine, the vehicle's performance is increased, fuel economy is better because lower quantity of fuel is burned to get the same performance and reduced grams of NOX are emitted the engine's overall operating temperatures are lower. Intercoolers were first used in turbo car in the 80’s, after it was used in competitions, especially on rally cars like the Lancia Delta. At First they were used only for performance increase as they allowed to increase torque and power without increasing the engine displacement. But with the adoption of pollution and consumption regulations, the intercooler was then mounted to have more performance in a smaller engine while keeping an eye on fuel economy and emissions. 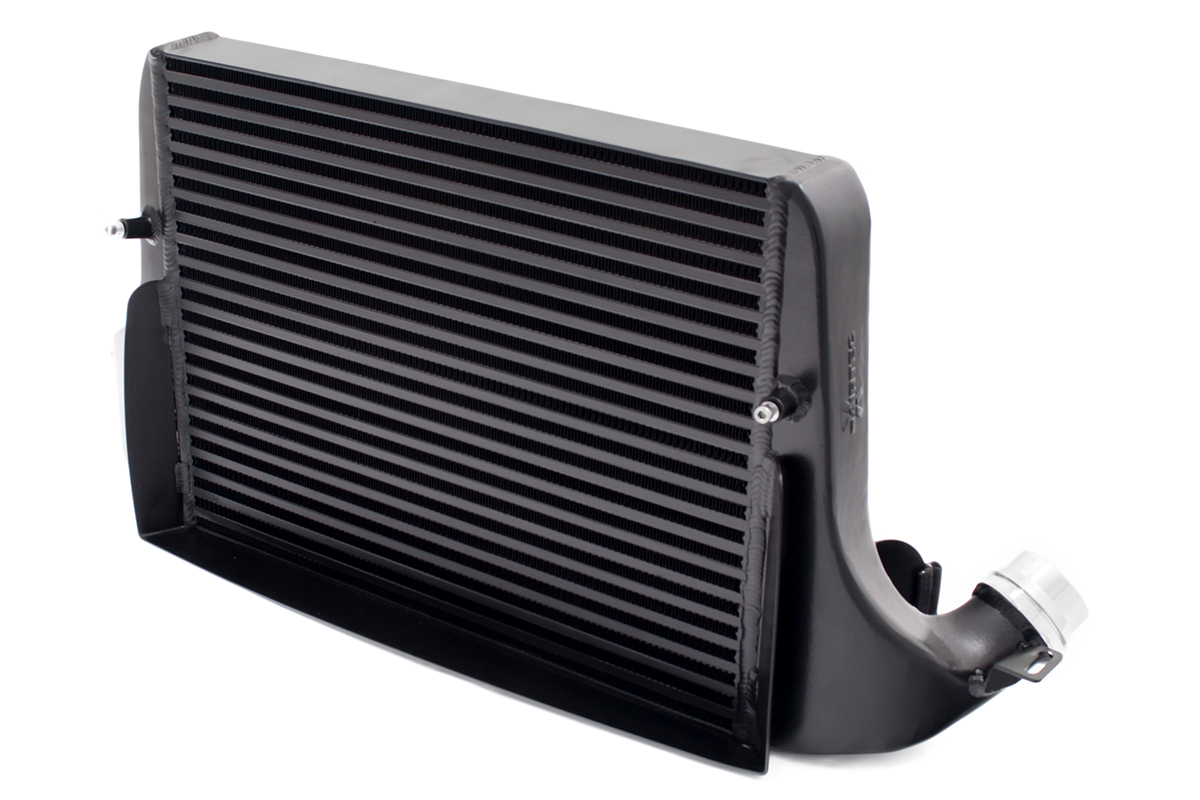 What i the intercooler for?

First of all there are two kinds of intercoolers: Air-To-Air Intercooler and Air-To-Water Intercooler.

In the Air-To-Air Intercooler, the air that comes inside the radiator is cooled by the air that comes from the outside and for this reason it is usually mounted behind the front bumper. It looks like a traditional radiator, formed by an array of many fins or flattened pipes inside of which the pressurized air passes and then is cooled by the air from outside that flows thanks to the movement of the vehicle. The air from the turbine is cooled down because the turbine is put in motion by exhaust gas which is hot. The hotter the air, the more volume it occupies, so a smaller quantity of air comes into the intake manifold of the engine. With the intercooler the temperature of the air is lower, so the volume is smaller, so more air will enter into the engine. There are several advantages: engine efficiency is improved by lowering fuel consumption, performance is increased and overall reliability is improved. However, this type of intercooler has a defect: Since it must be positioned in front of the vehicle and therefore away from the turbine, it must have connections that are long enough that can cause efficiency losses, also with the high temperatures plastic pipes can be deformed and therefore will let more air pass by lowering the speed in the entire system.

Air to water intercoolers are mainly used in supercars or on modified cars. They are more compact and can be mounted closer to the engine and therefore losing less load. Air that comes from the turbo in this case is cooled by the water present in the radiator. In this type of radiator there are no internal fins since there is water inside that has a dedicated circuit. In fact, an external pump pumps water to an external radiator to cool it down, giving more effective cooling temperatures. The disadvantage is that it is a much more complex system, leading to significantly higher costs. This type of intercooler made its debut on the 80's formula 1 during the turbo era. Some manufacturers used mixed type intercoolers with one Air-To-Water stage grouped with an Air-To-Air stage to form a single larger exchanger. The temperature difference between inlet and outlet can go up to 150 degrees.

In the past, the first vehicles to mount intercoolers were planes because they were equipped with two or more turbochargers positioned in series and therefore needed a mechanical device capable of lowering the temperature to improve performance but most important reliability. On the road, however, the first to install the intercooler were industrial and heavy machines, all equipped with big turbo diesel engines.